Hello, world, and welcome to the premiere installment of Character Study! I don't know about you, but I'm seven kinds of excited to be here! So the question is, what fan-favorite icon of comic book legends shall I elaborate upon first? And the answer is none other than Captain Atom! 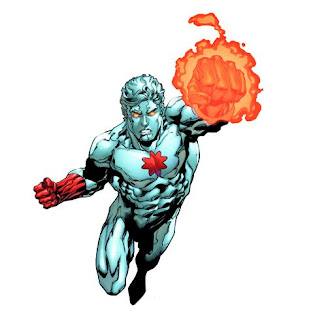 Character Conception
Captain Atom was created by Joe Gill and Steve Ditko for Charlton Comics and first appeared in Space Adventures #33 in 1960. Now, I scoured the internet for more information than that, but I couldn’t find much of anything. From what I can tell, the character was probably made to fill shelves.

According to the interwebs, Charlton Comics was not only the lowest-paying company in the industry but spent a lot of focus on publishing easy-to-produce, but lucrative adaptations of popular franchises. Taking their cost-cutting measures into account (like the fact that they printed comics using an old cereal press, no joke), it seems that Charlton was likely just trying to shovel out material on the cheap. Thankfully, Captain Atom was popular enough with readers to survive to this day, unlike some of their other heroes. Ever hear of Mercury Man? Yeah, there’s a reason you haven’t.
Secret Origin

Theorizing that one could time travel within their own timeline, Dr. Sam Beckett…. Sorry, wrong notes.
Allen Adam was a technician who was working on an experimental rocket, when it accidentally launched with him inside. The ship blew up in the atmosphere, which atomized him. But back on the ground, he rematerialized somehow. He woke up, feeling it in his bones. Enough to make his systems blow. Allen Adam was now radioactive, radioactive. He also gained superpowers, because radiation. He acquired a costume that would prevent him from spreading cancer (at least, I assume so), and used his powers to fight crime as…. Captain Atom!


After DC Comics acquired several of Charlton Comics’ characters, including Captain Atom, he got a new civilian name and origin, because it was the mid-1980’s, and radiation just wasn’t what it used to be. You know when something impossible happens in sci-fi? Not just unlikely, but simply impossible? And they explain it with some variation of “quantum-whatnot” and hope you stop asking questions? That was radiation in the 60’s: Sciencey-ness that just made things happen. But in the 80’s, people knew that radiation wasn’t magic. But Quantum? Pff, Quantum does anything you need it to. It's not like quantum physics makes sense.


Anyway, in DC’s revised origin, Air Force pilot Nathaniel Adam had been convicted of a crime he didn’t commit. They gave him two options: 100% chance of death by execution, or 99% chance of death by SCIENCE! They wanted to test an alien metal called “Dilustel” by surrounding someone with it…. And then nuking it. You know, just ‘cause.
He chose the experiment, and he was zapped 20 years into the future because that's how SCIENCE works. The alien metal bonded to his skin and he gained super powers. Speaking of which….

Powers/Abilities
Well, Captain Atom started off with the standard super-power package: unassisted flight, super-strength, super-durability, etc. He also got the ability to shoot and absorb energy free with limited purchase. The DC version, however, upgraded to the deluxe “Superconductor” package and is also resistant to magic, (probably because Quantum) has enhanced senses, (probably for the same reason) but with the trade-off that he has the tendency to explode if he absorbs too much energy or is sliced open. He’s also a crackerjack pilot with USAF training and his Vietnam experiences. His only real weakness is blades hardened by an X-Ionizer, which are sharp enough to cut even Superman.

Enemies
Captain Atom may be a great character, but, unfortunately, his villains aren’t. Let’s go over a few!
He’s usually regarded as Captain Atom’s nemesis, even though Major Force’s greatest victories were against Green Lanterns, like the time he killed Kyle Rayner's girlfriend. So Captain Atom doesn’t really have a nemesis of his very own. Instead of having a Joker to his Batman, it’s more like his Moriarty keeps going off to bother James Bond for a bit.

Character History
Well, the Charlton Comics version really has no history to speak of. Comics hadn’t really worked out this whole “continuity” thing for the most part. Comics back then were just a monthly instance of “Suffering Electrons!  Our heroes are again in the temperate clutches of the Firey-Icer! Can our heroes stop him this time!?” So let’s go check out DC.

After the Captain became a silver Oscar, he started working for military intelligence. But how do you explain a quantum-superman running around? Answer: Say he’s a superhero! But you can’t reveal that the government was experimenting with alien metal, that’s a security breach. So they claimed that he was working on a rocket that exploded in the 60’s, and the radiation gave him super-powers. Well, that story was so implausibly dumb… that everyone believed it. What? That makes as much sense as getting superspeed by soaking yourself in chemicals and getting hit by a lightning bolt.

Captain Atom got a new identity as “Cameron Scott,” but his life still sucked. His kids were now almost his age, his wife married the General he worked for, and was also dead. (He later remarried to a terrorist named Plastique, after an on-and-off relationship with her.) Also, Major Force happened.

Captain Atom infiltrated the Justice League, but ended up taking his heroics seriously enough to become the leader of Justice League Europe, and resigned from the Air Force to be a full-time hero.